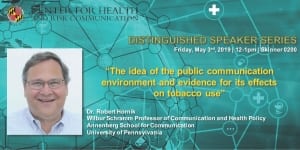 “Robert C. Hornik (Ph.D., Stanford University) is the Wilbur Schramm Professor of Communication and Health Policy at the Annenberg School for Communication, University of Pennsylvania. He directs Penn’s original Tobacco Center for Regulatory Science funded by FDA/NCI. His major current research project under that grant examines the effects of mass and social media diffused information about tobacco products on youth and young adult decisions about tobacco use. Between 2003-2014 he directed Penn’s National Cancer Institute-funded Center of Excellence in Cancer Communication Research. That program involved major population studies of the ways information seeking and scanning influenced decision-making throughout the cancer spectrum from prevention through screening, treatment and post-diagnosis survival. He has led the evaluation of more than 20 public health communication campaigns including those focused on child survival, HIV prevention and tobacco use throughout the world as well as the evaluation of the US National Youth Antidrug Media Campaign. He is the author of Development Communication, edited Public Health Communication: Evidence for Behavior Change and co-edited Prediction and Change of Health Behavior as well as more than 140 refereed articles and papers. He has served on five US National Academy of Sciences Committees, is a Fellow of the International Communication Association and received the Mayhew Derryberry Award from the American Public Health Association and the Lindback award for distinguished teaching at Penn.”