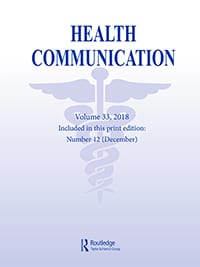 ABSTRACT
This study examined the effects of an anti-smoking campaign that employs a crowdsourcing method with a social networking service. Drawing upon social capital scholarship and the expression effect research paradigm in eHealth systems, the study also investigated the roles of social trust and community life satisfaction in the social media campaign that has a specific geographical boundary. To that end, we conducted an experiment using a two-group pretest–posttest design. We randomly assigned 201 participants to two conditions: “campaign message reception only” as a control group and “message reception and expression” as a treatment group in which participants fully engaged in the campaign process by sharing their own campaign ideas with other participants. Findings revealed that social trust and community life satisfaction interacted with the treatment condition to positively affect persuasive intentions, but in distinct ways. Social trust moderated the effect of the message reception and interaction condition on participants’ willingness to encourage community members to stop smoking. In contrast, community life satisfaction moderated the effect of the treatment condition on encouraging others to comply with the community’s anti-smoking policy. These results provide theoretical and practical implications related to the roles of social capital in geographically defined social media campaigns.